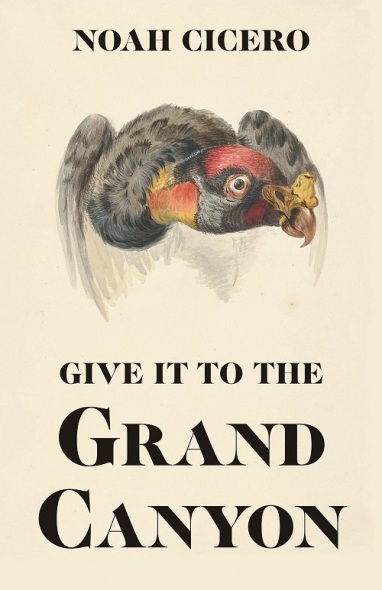 “Ashley would make hot dogs, Rich and I would be on the registers. There was also Debbie from the Bronx. She was a whirlwind of human emotion and Eastern American Sadness.”

Alright, ladies and gentlemen. Check this out and listen up. This is an absolutely beautifully crafted, well-written, fantastically unique gem of a book that I’m currently looking at right now as I continue to hit the keys on this black and white click-clacky keyboard. And, that book in reference is none other than Noah Cicero’s latest book ‘Give It to the Grand Canyon’ published by Philosophical Idiot Press, which I personally absolutely loved and adored and cannot recommend to you enough. The author’s writing is just so pure and genuine and poetic, it’s as if he sat down to write it to personally vent because he needed to. He needed to just sit there and tell us, as the reader, what he was going through at that time for a handful of distinct reasons, but, the main reason being that he just needed to and that it mattered more than anything else in that time. This comes naturally to us as the reader in the shape of these multi-cultural vignettes told from the point of view of our all-star narrator Billy Cox, who has moved back to the states after being in Korea for more than three years with his ex, when he comes back to the Grand Canyon (the closest place to home) where he takes a summer job making minimum wage at the National Park like most college kids do for a summer job. It’s during these times that our narrator self-reflects on a handful of different subjects through a handful of different characters that we all know and love and can relate to because we’ve all personally met somebody like them in the past. Those who can also all be found at the heart of that genuinely nostalgic Americana, being culturally diverse and accepting of others, mindfully respecting nature, nurturing self-care, finding true love and lasting commitment, coping with abandonment amidst struggling with our own interpersonal relationships, suffering from the overbearing weight of eternal sadness and depression, whilst trying to remain calm and sit back to do that intimate soul searching for that perfect American dream that others seem to wear so naturally, and others seem to fail so hard time and time again. Which is one of the factors that keeps Billy coming back to the canyon where he believes that there’s a much deeper connection to be found there.

“Maybe I could do that? Go into the canyon, get lost and let go, let death take me. But I knew I wouldn’t do that, I enjoyed missing her too much. I indulged in my misery, there was no intention of ending it.”

Our narrator points out that the Grand Canyon is more than just a tourist trap. There’s always somebody there. But, also, that the canyon is always there for you too. People traveling from all over seem to come and visit the beautiful landscape for the same reason. Just to stare into its’ soul. Our narrator finds this mostly peaceful, but eventually leads us astray into the darker themes of his own personal self-reflections when he makes the realization that he is always spending so much time in the local bars, asking others what they’re doing, or what they’re thinking and feeling, but never paying very much attention to himself or his needs and the pain he is suffering from, as he seeks solace within the confines of the canyon. On one of his hikes to the bottom of the canyon and back, Billy realizes that it’s all maybe just because he is afraid to confront who he really is. Maybe that is why he has felt like the Grand Canyon has always called out and spoke to him. Maybe he just needs to self-reflect. Give his memories full of pain and sorrow and suffering back to the Grand Canyon much like his friends Kaja and Sheila did when they were going through difficult times and healed by the canyon.

“She responded while wiping the counter, “But he doesn’t want to talk about it, he would probably feel better if he talked about it.”

Near the end of the book we as the reader come to the realization that Billy has just been struggling and trying to get over his ex-girlfriend the entire time. It’s confirmed that the reason he up and left Korea out of the blue was to simply get away from her, and that all the conversations and personal time and investments he’s taken in conversation and getting to know the many other’s around him was all just to avoid having to process those hopeless feelings of genuine sadness, depression, and personal abandonment from his past relationship with his ex-girlfriend. Coming to the realization that he spent most of his time henceforth avoiding the subject almost entirely, as he became devastatingly fixated on that lovesick sadness to where he was personally overwhelmed and consumed by the sheer weight of it. That it was all foggy (like when the fog rolled into the canyon and covered up all the beauty for days at a time). On his final hike to the bottom of the canyon and back he too finds himself giving it back to the canyon like his friends as he comes to the harsh realization of why it is that he actually misses her the most and is not over her just yet, and, that’s because he felt like he never had her heart. He felt like she would be with someone else now and asking how they were and she never cared about him in that way, so it wasn’t even necessarily the fact that she was gone anymore, but, more so in the fact that the general “concept” of her was missing in his life, and that was the sort of love and connection he personally felt like he needed. So, when he asked his friend Dream why it hurt so much. His friend told him that like everything else it was just something else that he’d lost, and that it was he, Billy Cox that was putting all of his pain into her.

“Dream said, “Because you feel like too many things have been taken, your brother died, your grandpa died, all your friends in Korea are gone, you don’t relate to anyone in your hometown. You are putting all of your pain into her.”

In the epilogue, we as the reader discover that his ex makes a trip out and visits the canyon years later after their relationship. She’s never been there before and she’s standing there talking and reminiscing about her relationship with Billy. She explains that their relationship had gone south because she was insecure about their relationship. She felt too young and dumb and insecure and scared, so she’d just ended it with him, as if to run away from it entirely to not have to deal with it because she felt like she was the problem. Billy doesn’t know this and probably never will which adds to the point of him adding the unnecessary weight of their failed relationship to the burden of everything else in his life much like he always had, and that perhaps he didn’t feel enough in the end because he was used to always feeling so much in the beginning.

‘Give It to the Grand Canyon’ is a brutally honest and genuine portrayal of contemporary Americana and modern cultural diversity while coming to terms with the severity of our own basic human nature in society today, and what it’s like to be physically and mentally attuned to your immediate surroundings and emotions. Everybody has a lovesick story to tell and a place to belong. It’s just all about the way in which we as human beings decide to get there that makes it all worth living for in the end.